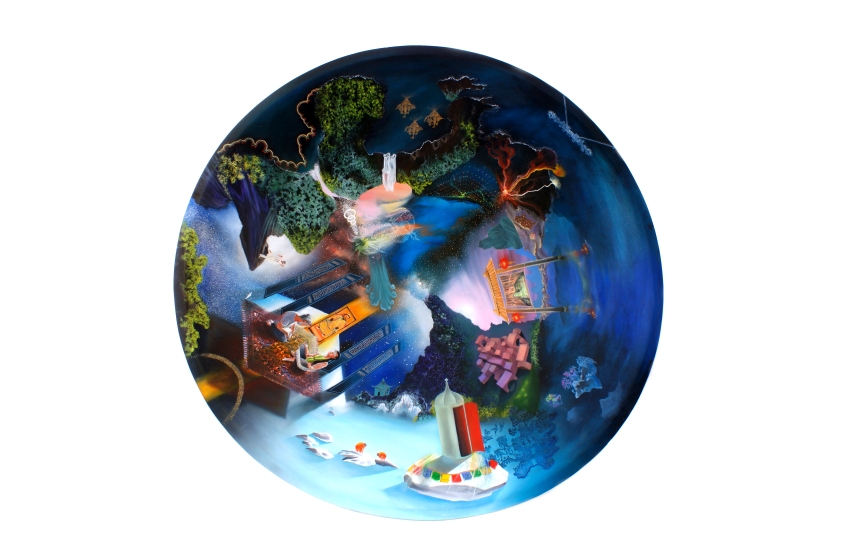 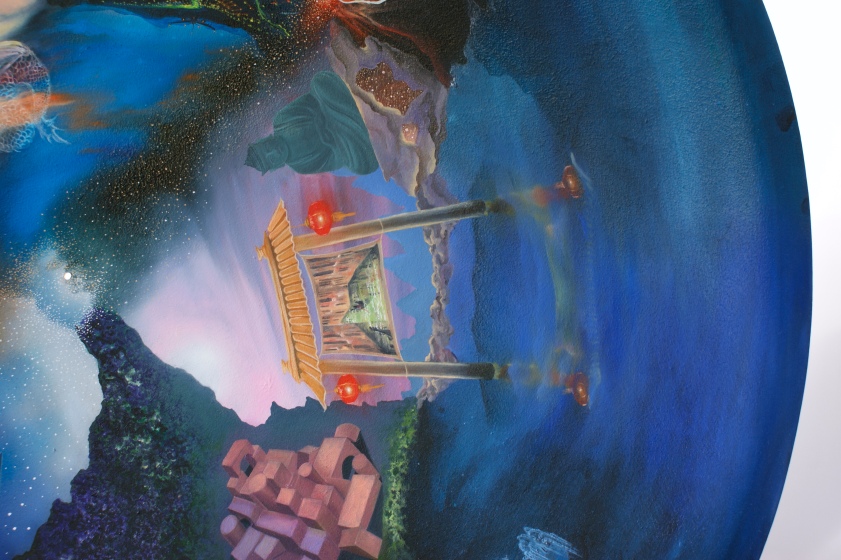 A Chinese cinema rises from the sea next to a coastal city. The screen, flanked by two lanterns, shows Venice, Marco Polo’s homeland far away.  Buddha observes quietly. Stars burst into the sky. 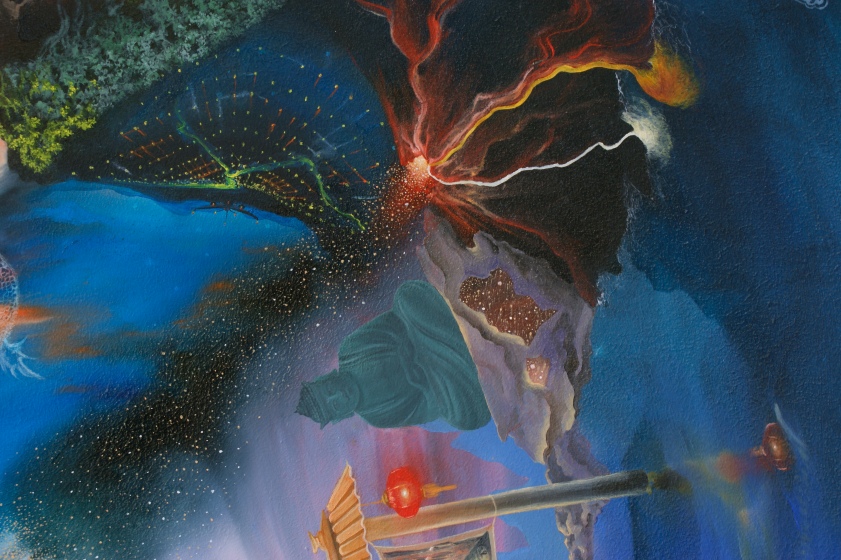 We see that the volcano also emanates stars. As well as rivers of milk and honey which flow into the vast ocean. In the distance, a plane lands at an aeroport lit up at night against a backdrop of a cyan blue perfect twilight sky. 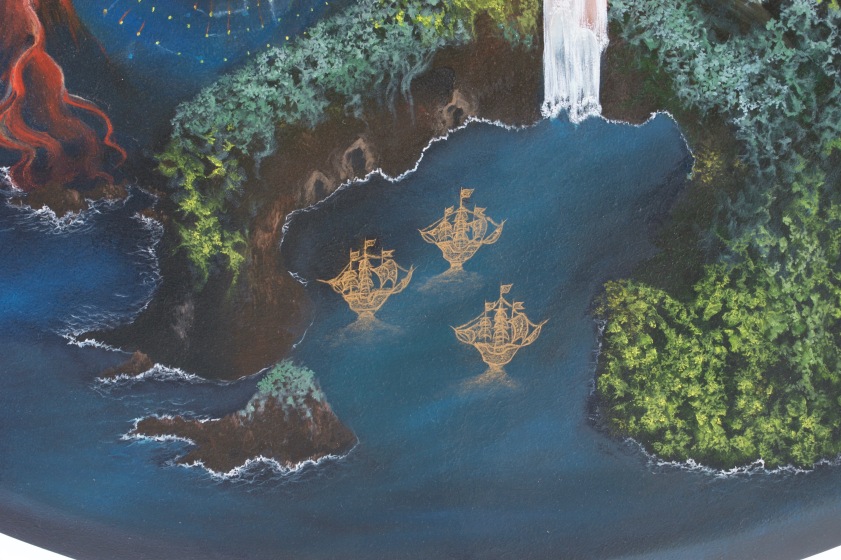 The waterfall gives way to a calm bay, in which 3 golden ships are a-sailing. 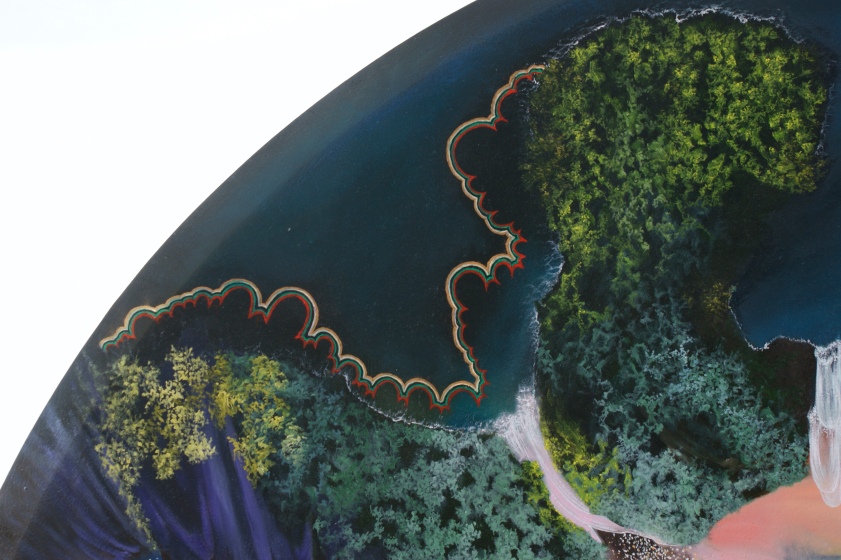 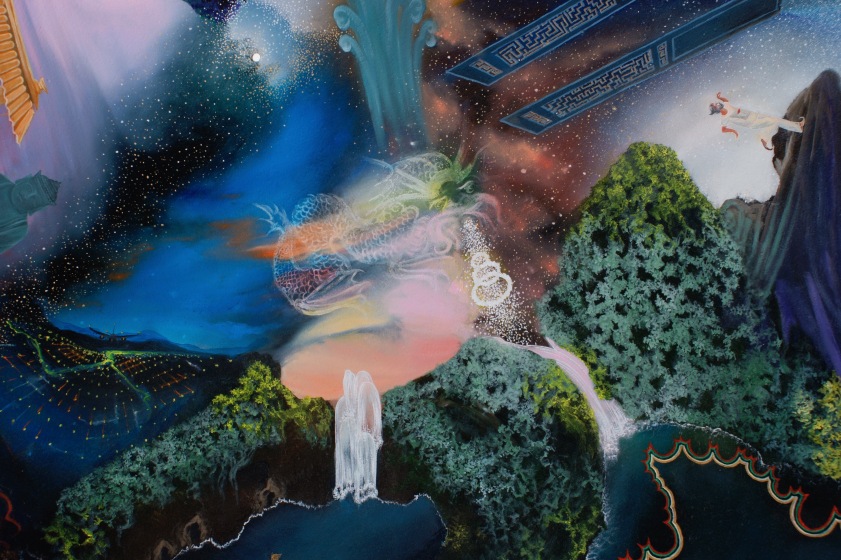 Above the pink sunset sky a cloud dragon lies in wait. It blows 3 lazy circles, thrice, while nudging the edge of the universe. We catch a glimpse of a balancing man. 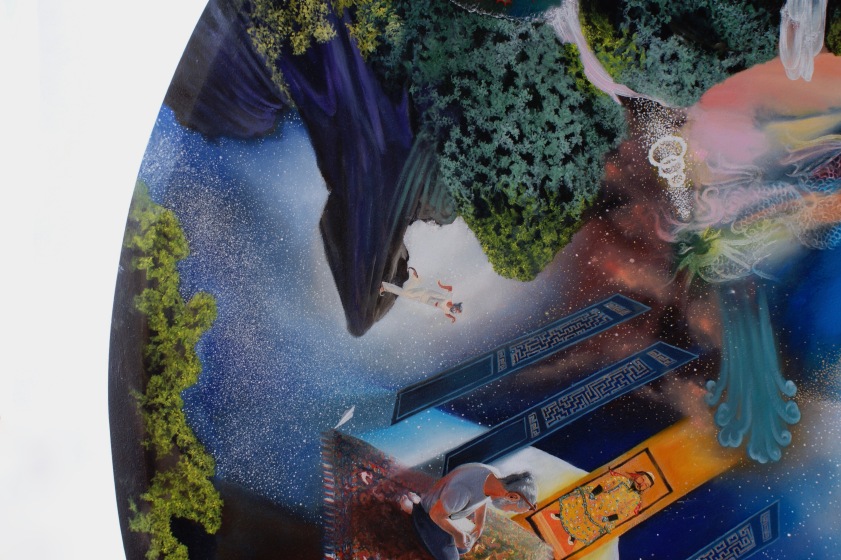 He balances on the ledge perched on the edge of a cliff which drops away to an abyss of a million stars below. There seems to be a paper aeroplane which has just left his hand, a trajectory which leads us to the edge of a carpet. 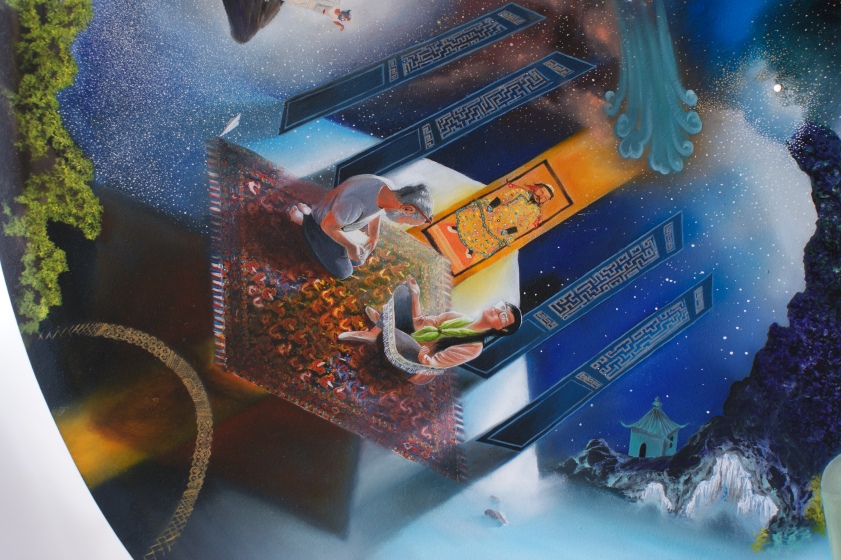 Seated on the carpet are 2 figures, connected by the rug underneath them but seemingly inhabiting two different worlds; each focuses on the thing at hand. For the man, it is the image in his mind which he seeks to fix on the paper. For the woman, it is the image from above which she seeks to capture in her mind’s eye. Perfectly content in each other’s presence, both are absolutely absorbed in their own universes while being grounded by the rug which happens to be floating, stationary, a little way above the sea. Beneath lurks an arcing Willow Pattern fragment. In the near distance, a little Chinese temple at night watching over caves of ice. 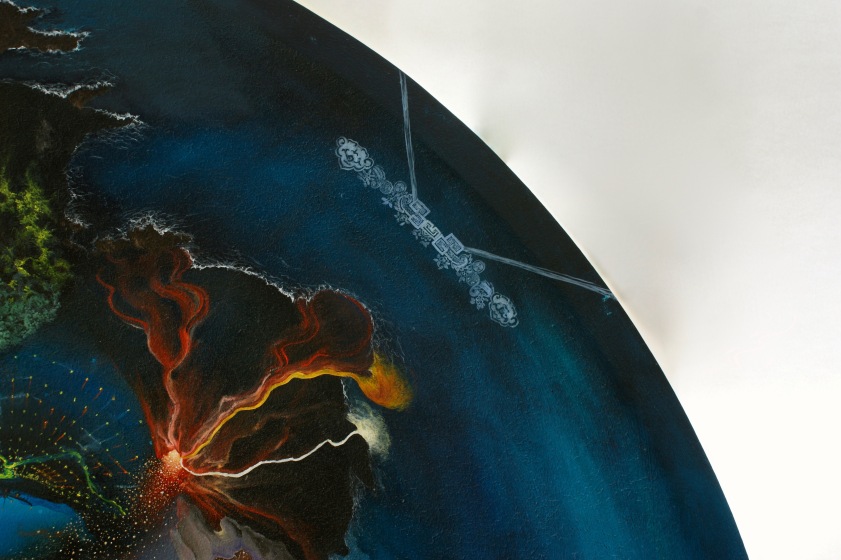 We scan the edges for the second Willow Pattern fragment. Here it is, at sea. 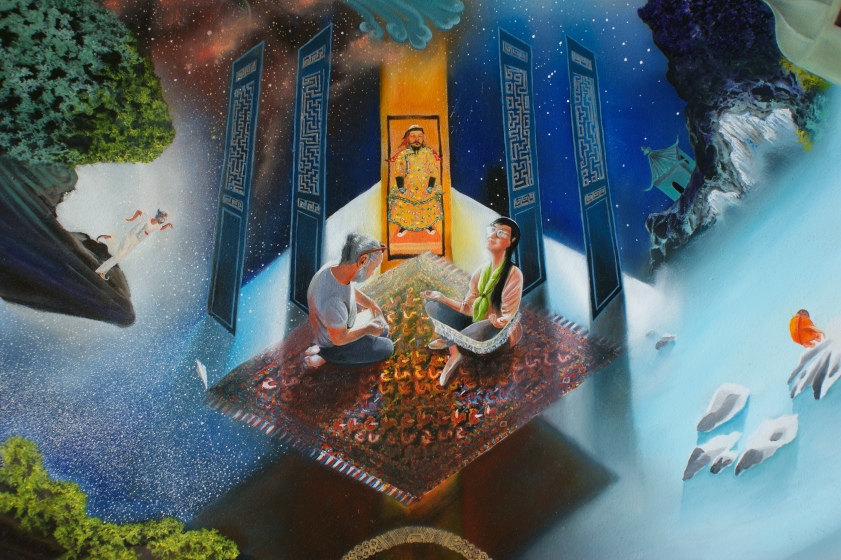 We return to the strange captivated figures. Between them is a yellow pillar with a painting of an Emperor. This is Kubla Khan. Only the Emperor is permitted to wear the royal yellow robes. A stone’s throw away, an abject monk. 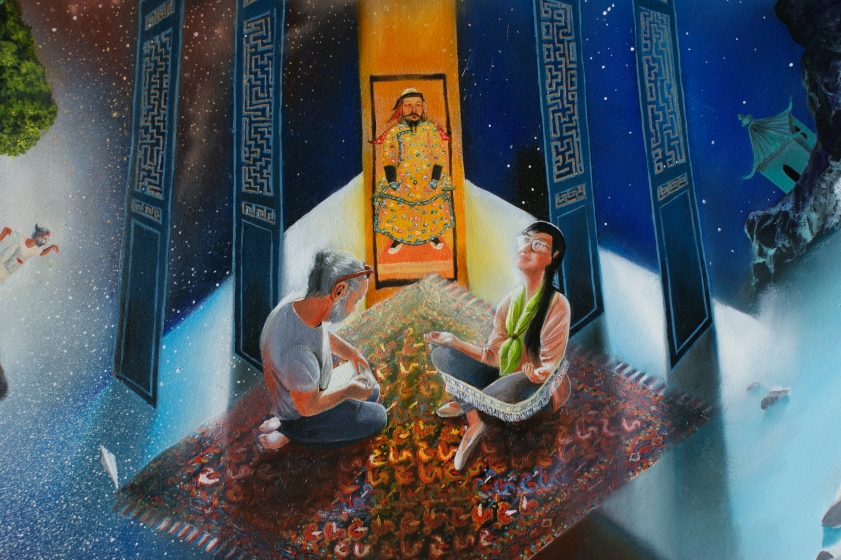 We are drawn by the strange square-like patterns on the screens framing the Emperor. We inspect them closer. They are not patterns. They are mazes. Yes, they are labyrinthine screens – each one has a little star indicating its start and end points and the mazes are incrementally harder to solve, from left to right. That is as it should be. 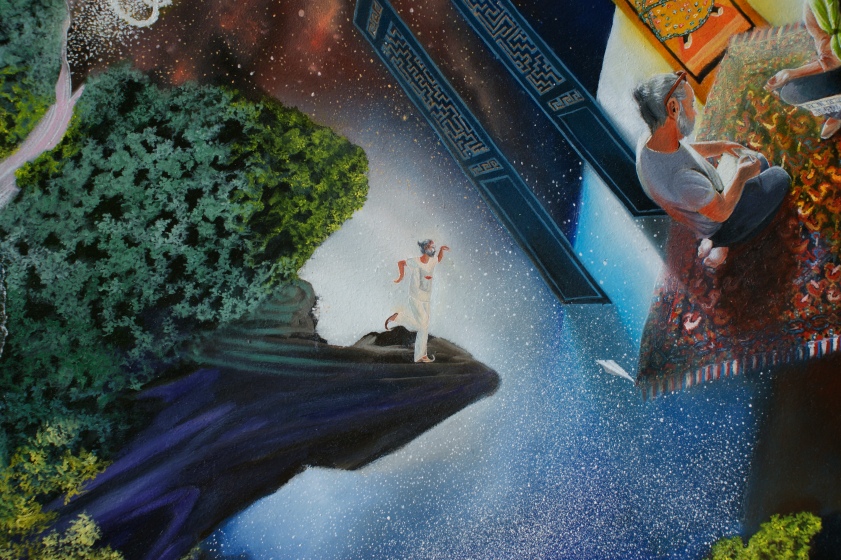 A little tired after peering intently at the intricacy of the mazes, our eyes zoom out and wander back to the vastness of the starry sky. 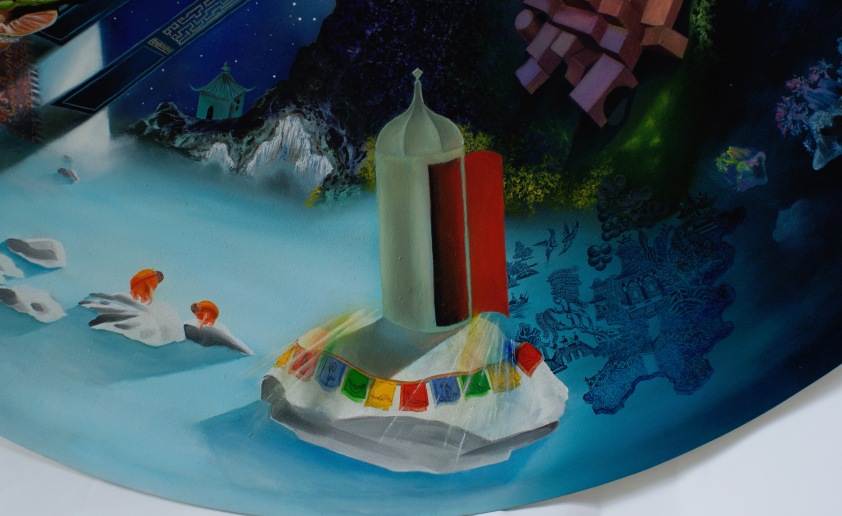 We wonder what holds the abject monks to their invisible task on the rocks in the cold, cold sunlit sea. Whatever absorbs them, they are absolutely enthralled. We see prayer flags surrounding the largest rock. We zoom in. Each painted flag shows a different asana pose illustrating the path to spiritual evolution, from the inanimate to the animate to the supernatural. The Mountain-Tadasana, the Tree-Vriksasana which represents the kingdom of plants, the Locust-Salabhasana, the Fish-Matsyasana, the Cobra-Bhujangasana, the Pigeon-Rajakapotasana, the Dog-Adhomukhasvanasana, the Warrior-Virabhadrasana, the Gods as Vishnu’s Couch-Anantasana. 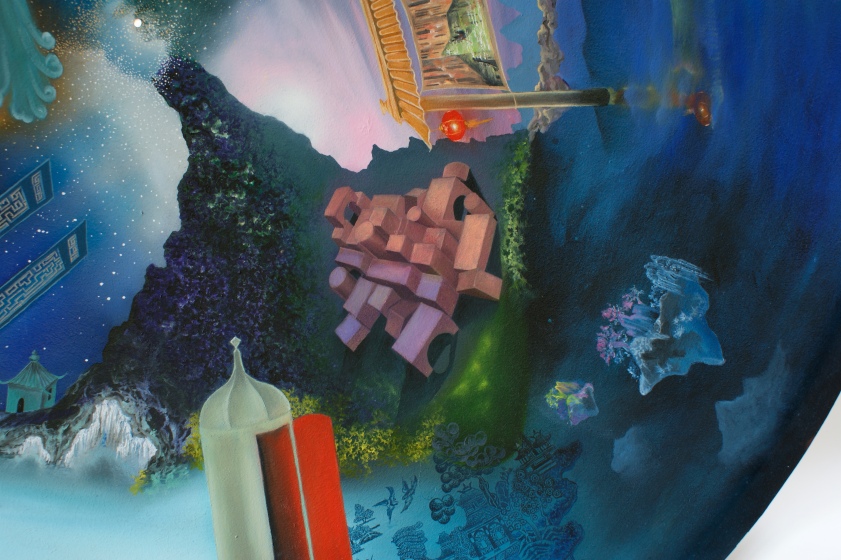 That was a lot of asanas. We take a break and drift towards 2 floating islands reflected in the sea. 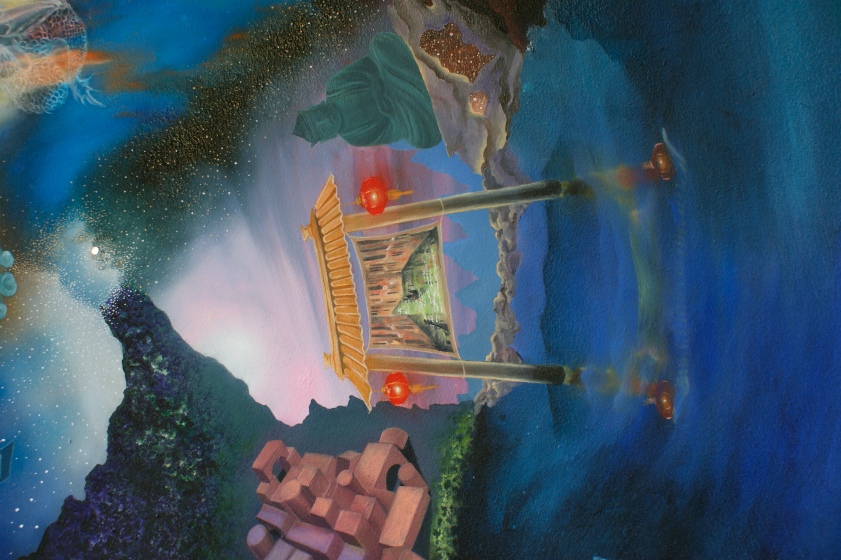 We realise that we have come full circle. Everything is connected. 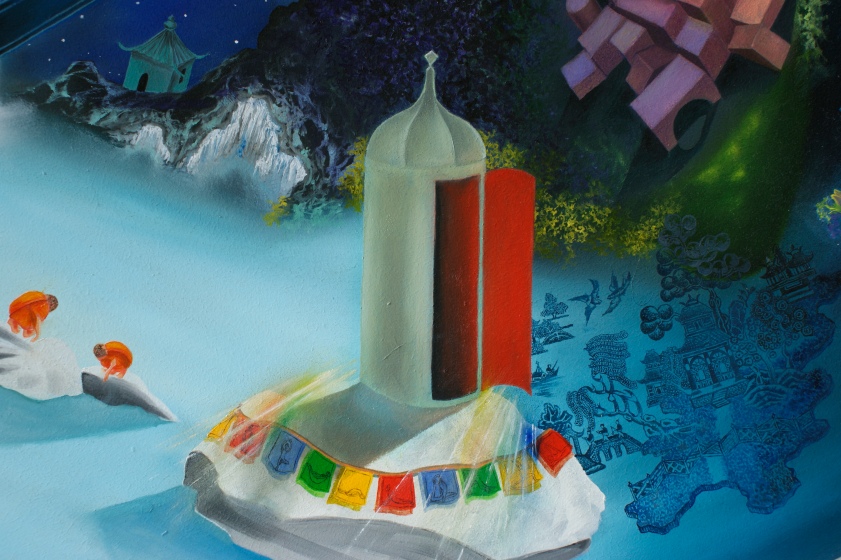 We wander back to the empty jade green pleasure dome. It is open. It is bright red inside. But that leaves us none the wiser as to its contents. Perhaps it is a Dr. Who-like portal. Perhaps it is a Narnia wardrobe, a door to different realms. Perhaps it is empty. It remains a mystery. 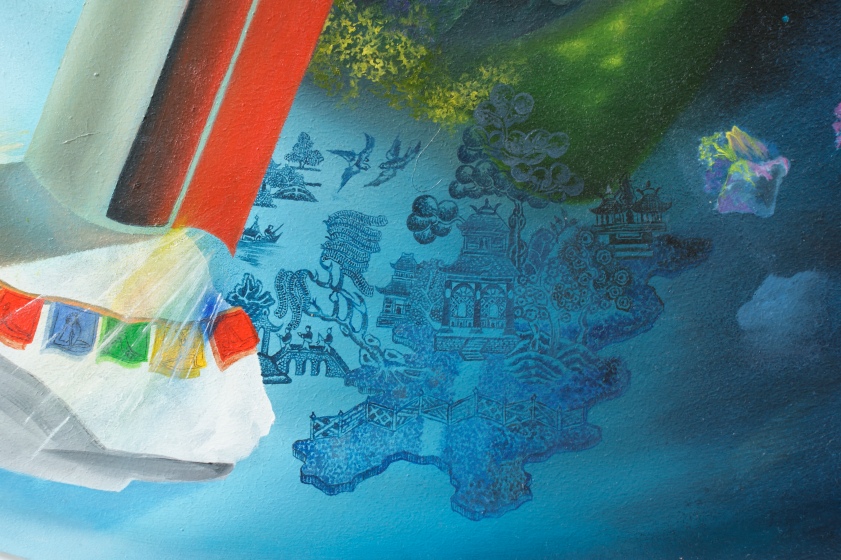 We stop to peer at the full Willow Pattern in all its intricacy, reminding ourselves that like everything else here, it was a figment of somebody’s imagination; it once existed in someone’s head and flourished in their mind’s eye; an armchair traveller who lived in the West but dreamed of China, just like Coleridge’s opium-induced vision of Xanadu, just like the boy Marco Polo’s dream of the East centuries before. 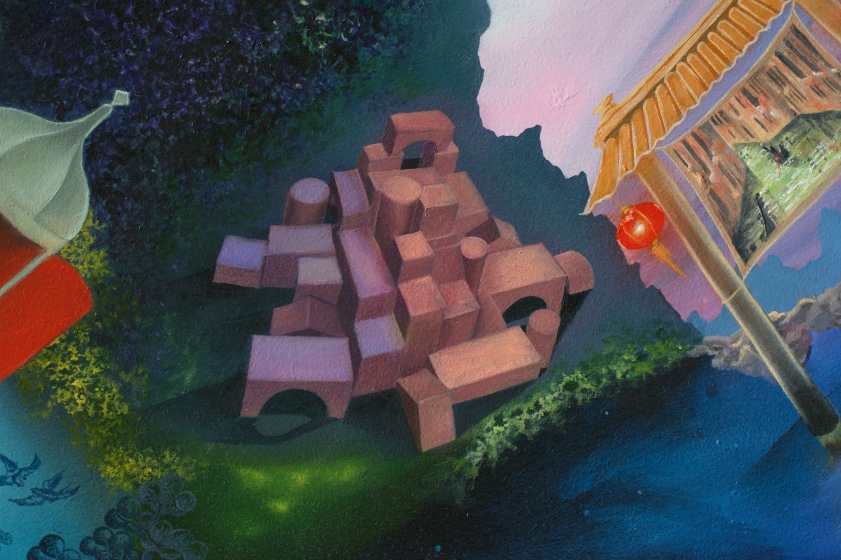 Breathless from travelling through space and through time, we return, as always, back to civilisation, back to reality, back to everyday working dreams, back to where we came from. Back to the drawing board and back to the basics. Back to the wooden blocks to begin once more to build. Back to the city, again ~