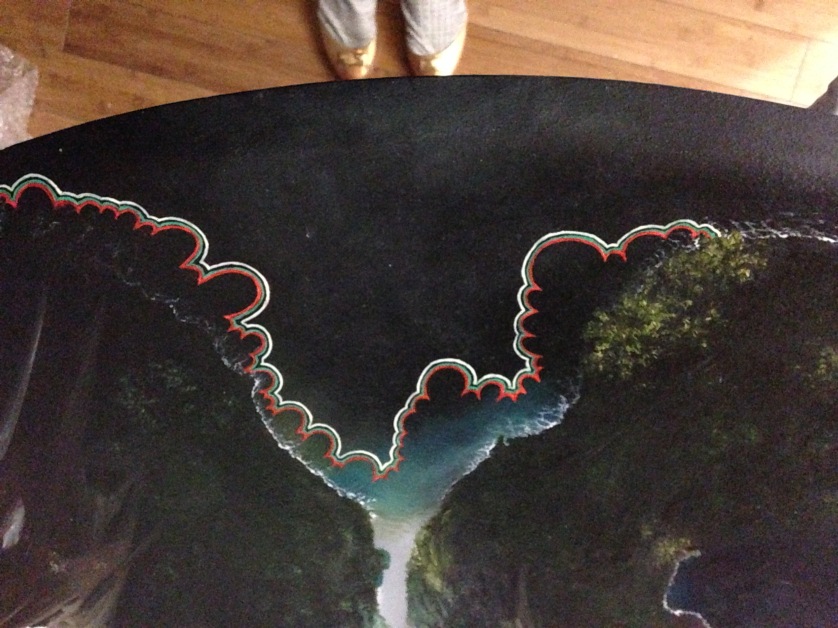 THE DOME AND KUBLA KHAN – IN XANADU…

My dome is inspired by Coleridge’s famous poem ‘Kubla Khan’. And I’m going in the dome.

Amazing poem, amazing back story. Possibly my favourite poem in the English language:

Or, a vision in a dream. A Fragment.
In Xanadu did Kubla Khan
A stately pleasure-dome decree:
Where Alph, the sacred river, ran
Through caverns measureless to man
Down to a sunless sea.
So twice five miles of fertile ground
With walls and towers were girdled round;
And there were gardens bright with sinuous rills,
Where blossomed many an incense-bearing tree;
And here were forests ancient as the hills,
Enfolding sunny spots of greenery.

But oh! that deep romantic chasm which slanted
Down the green hill athwart a cedarn cover!
A savage place! as holy and enchanted
As e’er beneath a waning moon was haunted
By woman wailing for her demon-lover!
And from this chasm, with ceaseless turmoil seething,
As if this earth in fast thick pants were breathing,
A mighty fountain momently was forced:
Amid whose swift half-intermitted burst
Huge fragments vaulted like rebounding hail,
Or chaffy grain beneath the thresher’s flail:
And mid these dancing rocks at once and ever
It flung up momently the sacred river.
Five miles meandering with a mazy motion
Through wood and dale the sacred river ran,
Then reached the caverns measureless to man,
And sank in tumult to a lifeless ocean;
And ’mid this tumult Kubla heard from far
Ancestral voices prophesying war!
The shadow of the dome of pleasure
Floated midway on the waves;
Where was heard the mingled measure
From the fountain and the caves.
It was a miracle of rare device,
A sunny pleasure-dome with caves of ice!

A damsel with a dulcimer
In a vision once I saw:
It was an Abyssinian maid
And on her dulcimer she played,
Singing of Mount Abora.
Could I revive within me
Her symphony and song,
To such a deep delight ’twould win me,
That with music loud and long,
I would build that dome in air,
That sunny dome! those caves of ice!
And all who heard should see them there,
And all should cry, Beware! Beware!
His flashing eyes, his floating hair!
Weave a circle round him thrice,
And close your eyes with holy dread
For he on honey-dew hath fed,
And drunk the milk of Paradise ~

Above is a map with cusped outlines that I love by Ottoman cartographer Piri Re’is. I studied him a little during my Medieval and Renaissance Studies MA at UCL a while back. He was from a family of corsairs and seafarers and he was also a navigator and compiler of geographical information and local culture (as mapmakers often were in those days, having multiple roles). His Kitāb-ı Baḥrīye, “Book of the Sea”, published in 1521 and revised 1524-1525 as a gift for Suleiman I, was one of the most famous cartographical works of the period.  I studied Christopher Buondelmonti in depth – he was the first to make an isolario, or a book of islands, the precursor to the modern atlas. And the portolan charts and littorals, the maps for ships that hug the coastlines, eventually gave way to wider spans of oceans. (All this and more in my Floating Islands thesis on my page at http://www.academia.edu) But in these early days I was inspired by the cute, almost cartoonish – yet still Renaissance – cusped outlines of Piri Re’is. It was almost as if he had grouped a mass of coastline into one big semicircle and just hazarded a guess as to the major areas – or that the coastline was symbolic, and painted in cusps because it only represented a coastline, not accurately. Visually, it makes for striking images and ones I couldn’t forget easily ~