My own unicorn dream, projected for my son at bedtime, in honour of Blade Runner 2049 ~

ON ISLAMIC ILLUMINATION – THE ARABESQUE

How can one not be entranced by these beautiful swirling patterns with no true centre? No centre but centres everywhere. The arabesque is like the map of a city. Little pockets of interest to hold your attention that quickly lead you on, via a twist and a turn, to another focus round the corner. I am mesmerised and calmed by these spiralling forms that are at once endless and finite, dancing ghosts captured by the edges that contain them.

Variously known as the Arabesque in the West, but also as biomorphic design, vegetal ornamentation, scrollwork, Islamic illumination, islimi/eslimi, tazhib/tezhip, they are a collection of forms that characterise Islamic art and were a synthesis of older cultures spanning China to North Africa. Indeed, khataei – a central component of the form – denotes those that stem from Cathay, China, and traditionally, anything Rumi meant those connected to Rum: Rome, or the Byzantine Empire. These are ancient motifs, collected the world over then transformed under the starry skies of the desert. The ancient Arabs took these things that exist in nature and made them unreal. No longer bound to the earth, they set them free, forever to whirl in their kaleidoscope ways over tiles and carpets, miniature book pages and grand towering architecture. They released these free spirits to cover the world, touching every surface, sparking true joy. (The desert peoples, observant of heavenly phenomena as they were, also folded clouds neatly into the heart of these patterns.)

Palmettes, rosettes, lilies, leaves, foliage, stems, spirals, waves, clouds, wings, dragons, phoenixes, simurghs and a calyx betwixt: these motifs include geometric, vegetal, animal, weather and even figural motifs. They uncurl like ferns, they curve and roll, they bifurcate, they split, they fork, they hit and run, they glance back on themselves, they shiver and tremble, they pulsate and vibrate, they weave in and out, they crest and peak like waves, they return and do it all again. They are round, ribbed, feathered, fluted, convoluted. In short, they are alive.

If we think about these motifs historically then we place them in a specific space and time, which is useful. Contexts are great starting points. But if we think about them symbolically, they become timeless and universal, which is far more meaningful. Poetry is not based on fact but on feeling. Thus they transcend their origins (do they ever matter?), laughingly go back to their Divine source, teasing adamant academics and frustrating scholars alike who fail to see past this simple truth. I am trapped and then released by these strange patterns that hold me in their maze then let me go. Always I see something new, find a new trajectory through, always I learn something. I am charmed. I like these bubbling, boundless patterns and could willingly lose myself in them.

They instantaneously connect me to the past, present and future, to the earliest times in which they were drawn, to the cultures that spawned them that are forgotten. Herein lies their legacy. Humble carpet weavers and mighty architects alike have all been at one time or another hypnotised by their rhythm. I always like to think of the humble Persian carpet weaver who is considered unlettered, yet who holds within her hands a vast repository of patterns that flow automatically from her fingers – she is in many ways far more literate than I am. I liken this to the oral Indian storyteller who holds entire epics in his mind, complete with rhythm and rhyme – on learning to read and write, all his memories are lost, in time, like… tears in rain. (The season of Blade Runner 2049!)

They start with a kind of centre, of course: the middle, or the bottom from which all things spring. But it is not a true centre; the eye, restless, wanders, thereby being forced to take in all of its creation. The patterns demand that you look at them as a whole. The eye travels, rests briefly on a focal point, then sets off again – at times re-entering the same focal point via a different meandering route, other times wandering off on a tangent to discover something new. There is no real end and no real beginning. They are infinitely, inexhaustibly wondrous.

Every part is equal and does not overpower its neighbours. All parts are respected and have enough personal space to breathe – yet not so much that they get lonely. There is no ego, no ‘I’. The tiniest element has a role and a meaning, without which the whole structure would collapse. Everything is necessary. There are no others. Perfect harmony, encoded. World peace, encapsulated.

Often, when confronted with something as vastly exciting and shimmering with possibilities as the arabesque, and finding it hard to categorise what it is, I look for what it isn’t. It isn’t a still, calm or stagnant lake; it’s a flowing river. It isn’t a solid mountain; it’s all the teeny tiny rocks that make up its mass.

My love for these forms grew as my little foetus grew and transformed inside me. They both started life as spirals. The arabesque emanates growth and is excited and eager to grow, move and dance around with the sheer joy of being alive now. I too have fallen under the spell of the arabesque, like countless other artists before me and doubtless countless others to come. This connectivity is reassuring, yet I feel as though I have a place; the patterns are accommodating, having already absorbed a multitude of cultures into their midst.

This is what makes one breathless with joy. Always moving, always travelling. An ancient metaphor for our modern nomadic times. One never steps in the same river twice. It’s the same with the arabesque. There is no need to trace the same route twice, because the flowing possibilities are infinite ~ 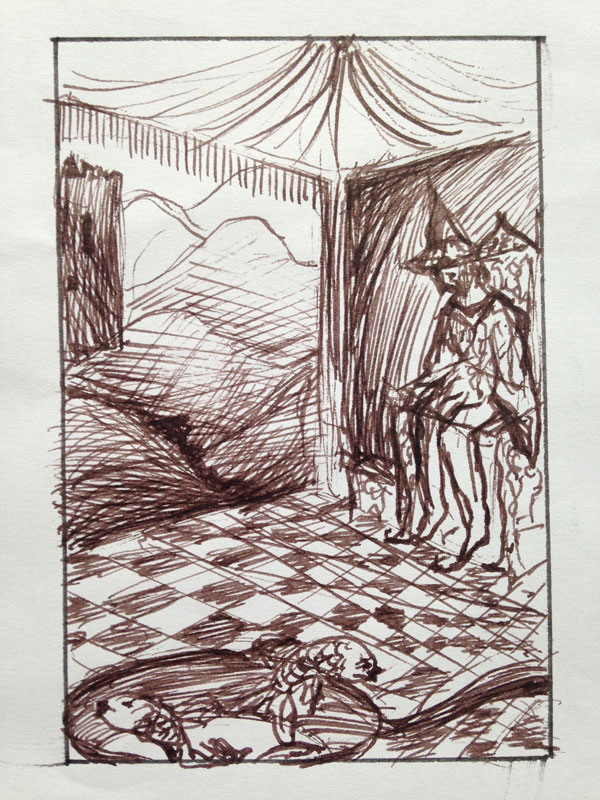